London is bracing for a Venezuelan invasion as Los Amigos Invisibles prepare to rock the UK capital to its ultra-funk foundations with a single live show on 9 July at the Clapham Grand (21-25 St John's Hill, Clapham Junction, SW11 1TT). Tickets are on sale through Ticketweb.com at £20.

To get a taste of the full Amigos experience, here's a video of the track 'En Cuatro' taken at a recent LAI concert in Argentina, where the boys blew the place apart with a trawl through their back catalogue.

After 19 years of creating infectious dance music the Invisible Friends show no signs of slowing down. Their latest CD 'Comercial' won them a Latin Grammy.

Video: Max and Jason have lunch with Los Amigos Invisibles 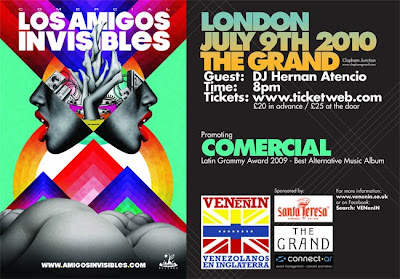 Posted by Russell Maddicks at 8:42 AM