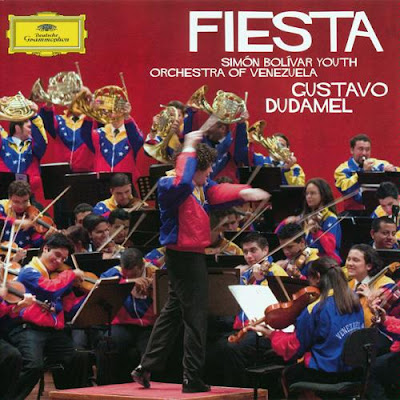 "Fiesta" (Deutsche Grammophon) is one of those rare CDs that is so good you play it till it wears out - a classical music feast of Latin American compositions that ends with a rip-roaring rendition of Leonard Bernstein's "Mambo" from the musical "West Side Story".

The 190-strong Simon Bolivar Youth Orchestra of Venezuela (SBYOV), led by the charismatic conductor Gustavo Dudamel, has electrified the usually staid world of classical music in the last few years, with sold out performances in all the major concert halls of Europe.

An appearance at the 2007 Proms at the Albert Hall in London, when the band came on dressed in Venezuela's national colours of blue, yellow, red and white ended with a 10 minute standing ovation.

The concert was a revelation for classical music fans in the UK and a huge boost for Dudamel and the Simon Bolivar Youth Orchestra, who recorded "Fiesta" as a way of capturing the experience of listening to the orchestra live and give their fans who couldn't get tickets a taste of what it was like to be at the Albert Hall concert.

Fiesta is exactly the right word to describe the eight upbeat works which appear on the album, which all celebrate the vibrant energy of Latin America, the vast geography of the region, the legacy of conquest and some of the many dance rhythms that bring people across the divided continents together.

The best-known track on the CD is undoubtedly "Mambo", US composer Leonard Bernstein's evocation of the Puerto Rican migrant experience in the tenements of mid-1950s Harlem. Classical music fans will also have heard works by Argentine composer Alberto Ginastera and Mexico's Silvestre Revuelatas.

But the revelation for most listeners will be the works by the Venezuelans Inocente Carreno, Antonio Estevez, Aldemaro Romero and Evencio Castellanos.

Many of these compositions evoke the folk music of Venezuela's vast seasonally flooded plains, known as Los Llanos, where barefoot cowboys herd cattle past small lakes filled with caymans and piranas, and where white ibis share the water holes with capybaras.

Romero's "Fuga con Pajarillo", for example, interweaves a classical fugue with the galloping rhythms of the "pajarillo" folk dance, while Estevez's "Melodia en el Llano" is slower and more nostalgic.

Dudamel has said of the piece: "It's very impressionistic, influenced by Debussy, slow, with beautiful melodies inside different colours."

The CD comes out at a good time for the SBYOV, who have just begun their five-day residency at the Royal Festival Hall at the Southbank Centre in London. The excitement around the orchestra is close to fever pitch and tickets for all the concerts sold out immediately, even for the rehearsals and the shows by the brass section.

The first reviews of the Royal Festival Hall shows have been gushing:

"Is this the best orchestra in the world? No. But the Simon Bolivar Youth Orchestra is classical music's hottest ticket, and with good reason," said Erica Jeal who gave the concert five stars in The Guardian.

"... there is a symbiosis here between conductor and ensemble that is quite electric," she concluded.

The youth orchestra's ability to affect social change in extremely deprived areas has not gone unnoticed either.

Gustavo Dudamel, speaking to the BBC, said the aims of the youth orchestra went beyond making magnificent music: "When you have around your life, drugs, crime, the best that you can give to a kid is an instrument. Then they can change their lives."

That philosophy looks set to spread. Projects in both developed and developing nations are currently underway to set up similar youth orchestras based on the incredibly succesful El Sistema model created by Venezuelan economist and philanthropist Jose Antonio Abreu in the 1970s.

Abreu realized that putting classical instruments into the hands of young children from the poorest shantytowns and teaching them to work together in a large orchestra gave them a sense of worth and the opportunity to change their lives.

Listen to "Fiesta" and you can hear that hope for a better future come alive.

Video: Gustavo Dudamel interviewed at the Proms in 2007

Posted by Russell Maddicks at 10:19 AM